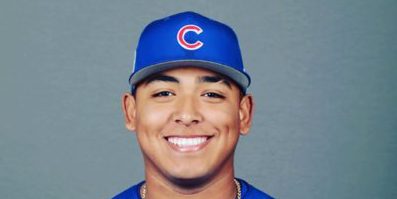 Estrada was drafted by the Chicago Cubs in the sixth round of the 2017 MLB Draft
On Aug. 16, 2017, Estrada made his professional debut with the Arizona League Cubs
Estrada pitched 6.1 innings, allowing only one run and five hits while striking out six and posting a 1.42 ERA
AWARDS:

When pitching in showcases across the nation, Estrada wears a blue bracelet with the inscription, “Negu,” which stands for “Never Give Up.” The quote symbolizes his support and care for a young girl named Daniella who is battling cancer in Rady Children’s Hospital of San Diego
Estrada is a self-proclaimed foodie who enjoys football, playing piano and spending time with his family
MEDIA HIGHLIGHTS: