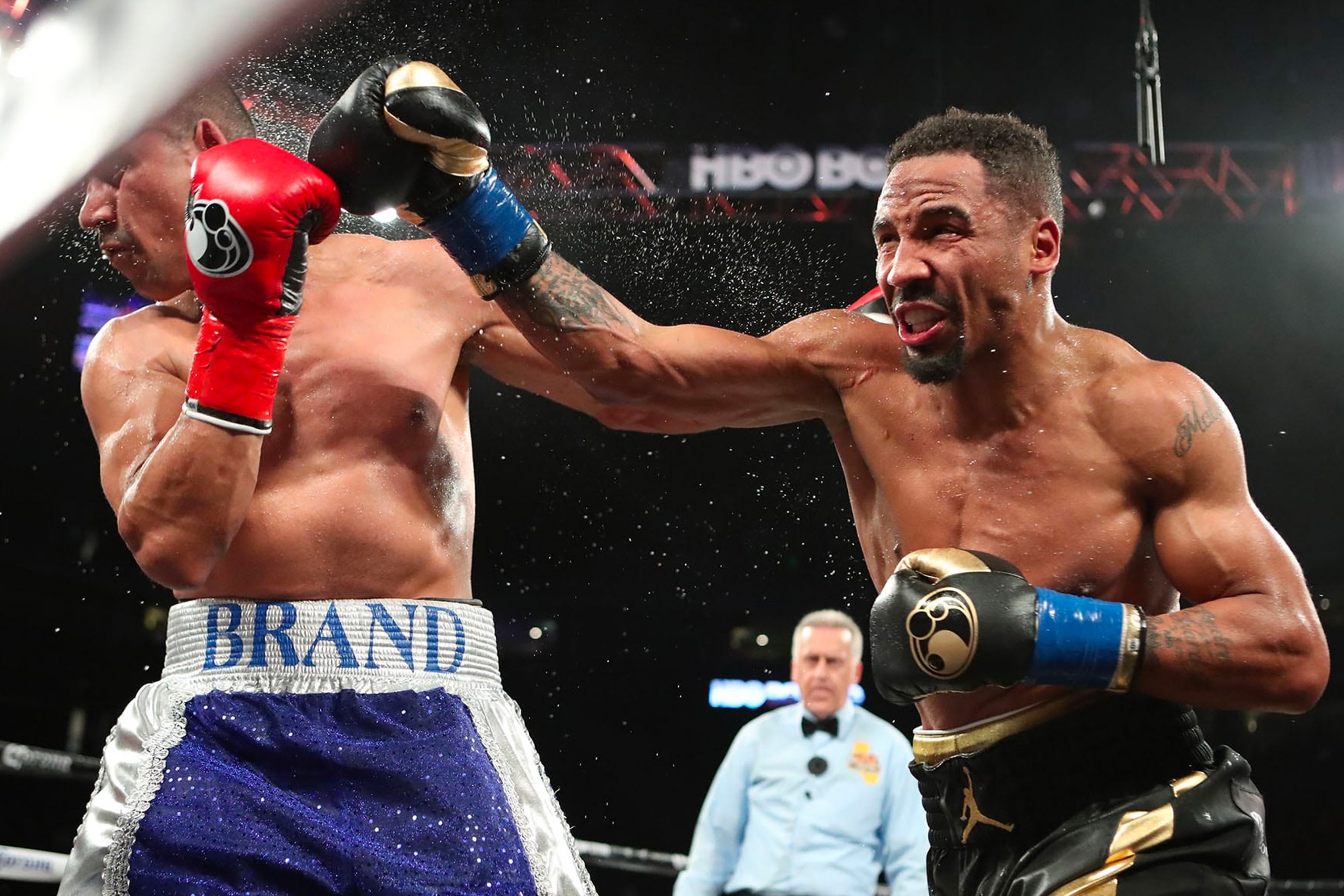 Before becoming the Ring Magazine and WBA Super Middleweight World Champion, rising to the number two spot on the pound-for-pound list and winning the 2011 Fighter of the Year Award (ESPN, Sports Illustrated, Ring Magazine and the Boxing Writers Association of America), a nine-year-old Andre Ward was taken to a boxing gym by his father Frank. He couldn’t possibly have known that the youngster would blossom in to one of the top amateur and professional fighters in the sport. He asked trainer, Virgil Hunter, “to teach his son to hit and not get hit.” Hunter, now Ward’s Godfather, more than delivered on his promise, helping to develop his pupil into one of the most skilled technicians in boxing.

Known for his strong character and integrity outside the ring and his warrior’s instinct inside it, Ward’s skill and talent were apparent early in his outstanding amateur career. He racked up every title in the books, culminating in a gold medal in the light heavyweight division at the 2004 Olympic Games in Athens, Greece. As the only male American boxer to claim Olympic gold in the past decade, Ward joined the likes of Muhammad Ali, Sugar Ray Leonard and Oscar De La Hoya. He is a regular on HBO, both in the ring and behind the microphone as an expert analyst on their commentary team.

He turned professional on December 18, 2004, scoring a second round technical knockout victory over Chris Molina at Staples Center in a fight that was televised live on HBO. He has gone on to rack up 29 more victories since that time, building an ever-growing legion of fans in the process.

In 2009, Ward signed on to join five fellow elite super middleweights in the highly acclaimed SHOWTIME Super Six World Boxing Classic. Shortly after, he fulfilled his lifelong dream by winning the WBA Super Middleweight World Championship with a dominating performance over former World Champion Mikkel Kessler in front of over 10,000 adoring fans at the Oracle Arena in his hometown of Oakland, Calif.

He next made three successful defenses of his WBA title, defeating Allan Green, Sakio Bika and former World Champion Arthur Abraham, dominating his competition in all three fights. Ward’s victory over Arthur Abraham extended his winning streak to 15 years, which reaches back to 1996.

His Super Six efforts culminated in a dominant 12-round unanimous decision victory over Carl “The Cobra” Froch in the Super Six final on December 17, 2011 in Atlantic City, New Jersey. The victory earned Ward the WBC and Ring Magazine Super Middleweight World Championships as well as the highly coveted SHOWTIME Super Six World Boxing Classic Cup. As a result of his dominant performances over top-flight competition, Ward was named 2011 Fighter of the Year by every major media outlet.

While many fighters would have taken on a lesser opponent following a run such as Ward’s through the Super Six, the reigning Fighter of the Year chose fellow World Champion Chad Dawson as his next opponent. A fellow pound-for-pound list regular and the light heavyweight world champion, Dawson met Ward in his hometown of Oakland in a highly anticipated showdown on September 8, 2012, which was televised on HBO’s World Championship Boxing. Ward didn’t disappoint the packed house at Oracle Arena, stopping Dawson in the 10th round of a thoroughly dominant performance. The hometown favorite sent Dawson to the canvas in three different rounds enroute to adding the 26th victory to his resume.

Following 14 months out of the ring due to major shoulder surgery, Ward made a triumphant return on November 16, 2013 with a dominating victory over previously undefeated contender Edwin Rodriguez at Citizen’s Bank Arena in Ontario, California. With boxing greats including Sugar Ray Leonard, Mike Tyson and his childhood idol Roy Jones, Jr. on hand, the super middleweight king handed the much larger Rodriguez his first professional defeat.

On January 9, 2015, it was announced that Ward had signed an exclusive promotional agreement with Roc Nation Sports, opening a new chapter in his boxing career.

On June 20, 2015 at Oracle Arena in Oakland, Ward made his highly anticipated return to the ring. In front of a packed, star-studded house, Ward scored a decisive ninth round technical knockout victory over Two-Time World Title Challenger Paul Smith in a fight that was televised live on BET in the network’s first ever boxing telecast.

In the fall of 2015, Ward signed a multi-fight deal with HBO and announced that he would be vacating his WBA Super Middleweight World Championship ahead of his move up in weight to the light heavyweight division.

On March 26, 2016, Ward made his highly publicized 175-pound debut against Cuba’s undefeated and IBF number one rated light heavyweight contender Sullivan Barrera in front of frenzied crowd at Oracle Arena that including luminaries such as Michael B. Jordan, Stephen Curry, Marshawn Lynch and Draymond Green. Ward expertly managed the fight and began to unravel his opponent in the third round when he caught Barrera with a counter left hook, dropping him to the canvas. The rest was a routine victory for Ward. who scored a dominating dispatch of Barrera by way of unanimous decision.

Ward’s goals don’t end inside the boxing ring as he is building a career as a boxing commentator through his work on HBO’s World Championship Boxing and Boxing After Dark telecasts. A true perfectionist, Ward has put tremendous time and effort in to his work behind the microphone, honing his skills on small shows early in his broadcasting career before moving up the ladder to ESPN and HBO. He also completed an internship with a Bay Area Comcast station in order to learn all the details, nuances and intricacies involved with live sporting event telecasts.

Ward continued his conquest of the light heavyweight division on August 6, 2016 at Oracle Arena, in Oakland, CA, taking on power-punching Colombian Alexander Brand in a 12-round contest. With the WBO Intercontinental title on the line, Ward once again emerged victorious by way of unanimous decision, with all three judges scoring the bout 120-108. Immediately following the decision, Ward announced in the ring that he will be taking on unified Light Heavyweight Champion Sergey Kovalev.

On November 19, 2016, Ward defeated Sergey Kovalev by unanimous decision in the ultimate showdown for division supremacy and recognition as the best pound-for-pound fighter and became the unified Light Heavyweight Champion.

In 2015, Ward stepped in front of the camera for a completely different role, a part in the acclaimed New Line/Metro-Goldwyn-Mayer/Warner Bros. feature “Creed.” Fellow Bay Area natives, director Ryan Coogler and the film’s star Michael B. Jordan, reached out to Ward so that he could provide his expertise for the film. In addition to working in front of the camera with Ward, Jordan spent time at Ward’s home gym in preparation for his role as Apollo Creed’s son.

A proud Bay Area product, being a consistent, positive presence in his community is of great importance to Ward. Throughout the past several years, he has visited numerous schools, prisons and youth facilities, including the Santa Clara County Juvenile Detention Center, William F. James Ranch and Camp Parks military installation, to share his inspirational success story. Ward doesn’t limit his outreach to the Bay Area, he’s also traveled to Capitol Hill to speak about the importance of a healthy lifestyle and motivated young boxers at numerous USA Boxing events across the country.

Ward is a loving husband to his wife and high school sweetheart Tiffiney and a proud father of their sons Andre, Jr., Malachi and Micah and their daughter Amira. A devout Christian, he incorporates his faith into every aspect of his life and is a strong role model to his fans around the world. He and his family reside in San Ramon, California, just outside of Oakland.
Follow Us