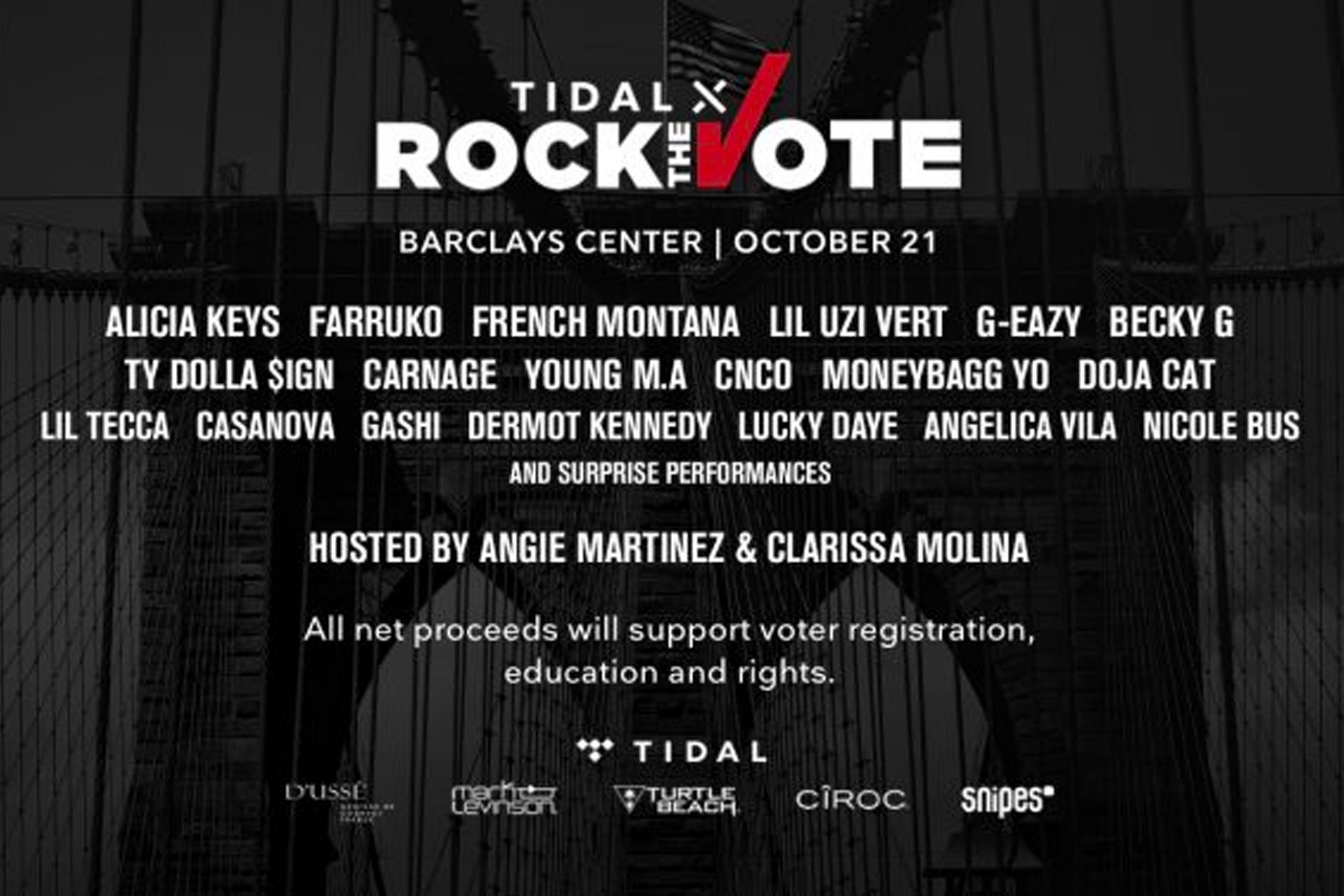 The 2020 election will be a critical moment for our communities and it is imperative to ensure record-breaking youth voter turnout. One hundred percent of net proceeds from ticket sales and campaign will be donated to Rock The Vote to register and prepare new voters who are unfamiliar with the process; build coordinated efforts with grassroots organizations in its partnership network to mobilize underserved youth across the country; litigate to fight for voting rights; and lead a high school civics education coalition.

Beginning today at 12:00 PM ET until 4:00 PM ET, TIDAL members will have exclusive access to a limited time discount  on the purchase of standard tickets viaTIDAL.com/RockTheVote or the TIDAL App (mobile & desktop). Tickets go on-sale to the general public beginning 4:00 PM ET and can be purchased online at Ticketmaster.com

Fans worldwide will be able to learn more, tune-in to the show and participate in fundraising efforts at TIDAL.com/RockTheVote. Fans can also text TIDAL to 788-683 to donate.

With support from partners like Mark Levinson By Harman, CIROC Ultra Premium Vodka and Snipes, 100% of net proceeds will be donated to Rock the Vote.

Since inception in 2015, the “TIDAL X” benefit concerts have raised millions of dollars for social justice, criminal justice reform, disaster relief & recovery, and education causes. Each year more than 30 of the world’s premier superstars and most promising emerging artists gather to support those in need across the globe. Past performers include Stevie Wonder, Beyoncé, JAY-Z, Ms. Lauryn Hill, Jennifer Lopez, Kaskade, Fifth Harmony, Jessie Reyez, Alessia Cara, Flatbush Zombies, Bazzi and many more — you can watch their performances here: TIDAL.com/Brooklyn

Media interested in covering the benefit concert can apply for credentials here: https://forms.gle/NpSYSEQSMhdaZaEd6

TIDAL is an artist-owned global music and entertainment platform that brings artists and fans closer together through unique original content and exclusive events.

Available in 54 countries, the streaming service has more than 60 million songs and 250,000 high quality videos in its catalog along with original video series, podcasts, thousands of expertly curated playlists and artist discovery via TIDAL Rising. With the commitment of its owners to create a more sustainable model for the music industry, TIDAL is available in premium and HiFi tiers—which includes Master Quality Authenticated (MQA) recordings.

About Rock The Vote

Rock the Vote is a nonpartisan nonprofit dedicated to building the political power of young people. For nearly 30 years, Rock the Vote has revolutionized the way we use culture, music, art and technology to engage young people in politics, registering and turning out millions of young voters. During the last seven Presidential elections, Rock the Vote and its partners coordinated the largest voter registration drives for young people that added nearly 8 million new voters to the rolls and consistently turns out its voters more than 30 points above the national youth average. Rock the Vote fights for voting rights to ensure that all eligible voters can exercise their right to vote and promotes civic education to ensure young voters to have the resources and information they need to participate in our civic process. Learn more at rockthevote.org and follow us on Twitter, Facebook, and Instagram @rockthevote.