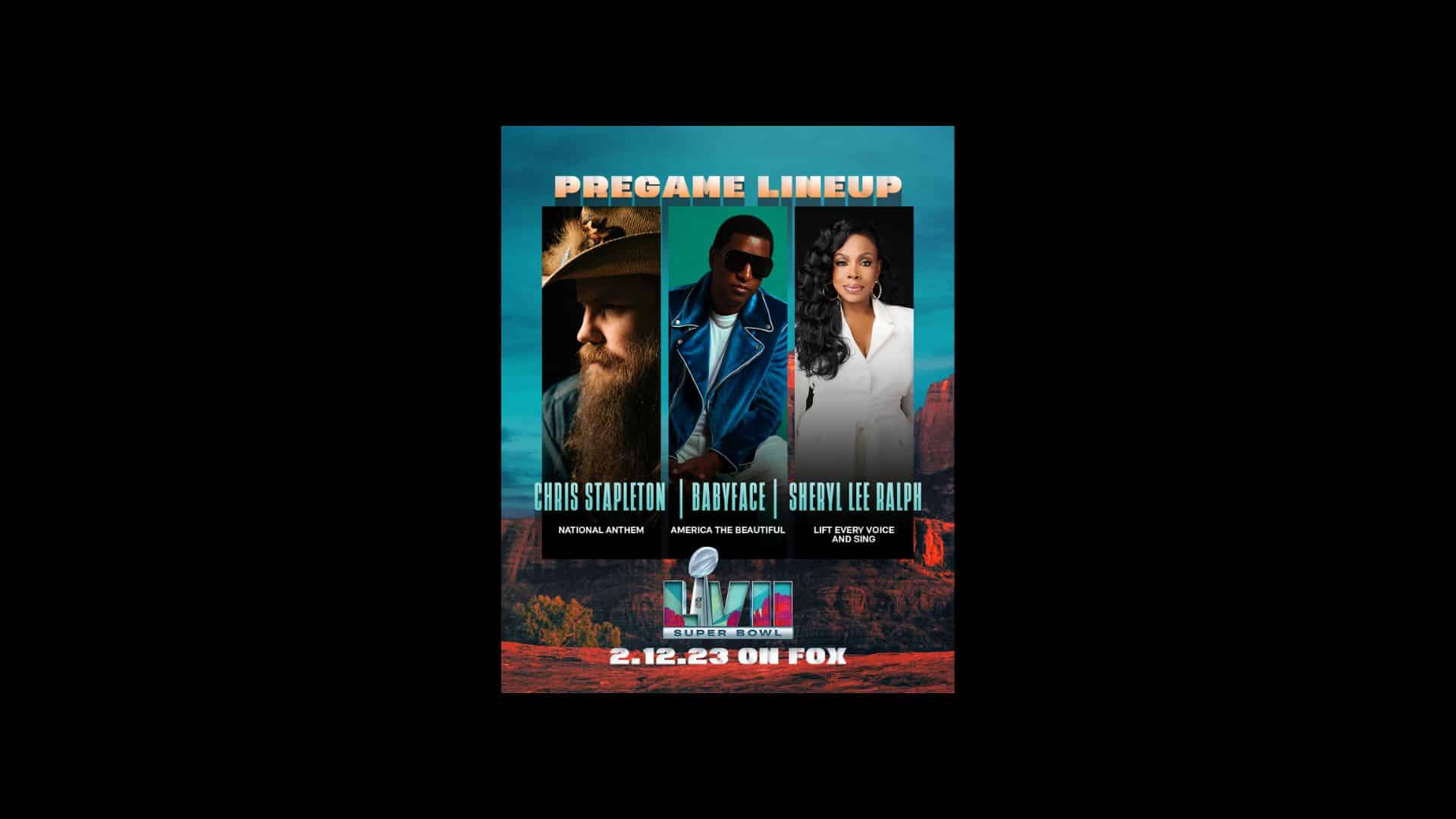 New York, NY [January 24, 2023] – The NFL today announced the pregame entertainment
lineup for the Super Bowl LVII in Arizona, which will be played at State Farm Stadium on
Sunday, February 12, 2023, and will be broadcast on FOX.

Acclaimed musician and songwriter CHRIS STAPLETON will sing the national anthem. An 8x
Grammy, 15x CMA and 10x ACM Award-winner, Stapleton is one of the country’s most
respected and beloved musicians.

On behalf of the National Association of the Deaf (NAD), renowned actor and Arizona
native TROY KOTSUR will perform the national anthem in American Sign Language (ASL). For
his acclaimed work in the movie CODA, Kotsur became only the second Deaf person ever to
win an Oscar, in the category of Best Supporting Actor. COLIN DENNY, a Deaf Native
American, will sign “America the Beautiful,” and is a proud member of the Navajo Nation in
Arizona. Deaf performer JUSTINA MILES will sign “Lift Every Voice and Sing” and also provide
the ASL rendition of the Apple Music Super Bowl Halftime Show.

To commemorate 50 years of Women Flying in the U.S. Navy, the service will conduct a flyover
of State Farm Stadium during the national anthem. The formation will be composed of an F-35C
Lightning II from the “Argonauts” of Strike Fighter Squadron (VFA) 147, two F/A-18F Super
Hornets from the “Flying Eagles” of VFA-122, and an EA-18G Growler from the “Vikings” of
Electronic Attack Squadron (VAQ) 129.

The NFL previously announced that international icon RIHANNA will headline the Apple Music
Super Bowl Halftime Show which will be produced by DPS with Roc Nation and Jesse Collins
serving as executive producers, and Hamish Hamilton serving as director.

About Chris Stapleton: Kentucky-born Chris Stapleton is an 8x Grammy, 15x CMA and 10x
ACM Award-winner and one of the country’s most respected and beloved musicians. Most
recently, he was named CMA Male Vocalist of the Year for the sixth time — setting the record for
most wins ever in the category. Stapleton’s most recent album, Starting Over, also recently won Best Country Album at the 67th Annual Grammys as well as earning Album of the Year honors
at both the 54th Annual CMA Awards and 56th ACM Awards. The record follows Stapleton’s
pair of Platinum-certified releases from 2017, From A Room: Volume 1 and From A Room:
Volume 2, as well as his x5 Platinum breakthrough solo debut album, Traveller. Known for his
electric live performances, Stapleton will join George Strait for a series of stadium shows this
year with special guests Little Big Town. In addition to his work as a musician, Stapleton and his
wife, Morgane, are founders of the Outlaw State of Kind charitable fund, which supports a
variety of causes that are close to their heart. Most recently, Stapleton’s “Kentucky Rising”
concert last month raised over $2.8 million to support flood relief in Eastern Kentucky.

About Babyface: Kenny “Babyface” Edmonds is one of the most celebrated creative forces in
music. He has contributed to over 800 million records sold and over a billion records streamed.
Babyface has produced and written 125 Top 10 hits, 44 No. 1 R&B hits and 16 No. 1 pop hits.
As a recording artist, songwriter and producer, he has won a total of 12 Grammy Awards and
ranks as the only individual in Grammy history to be honored as “Producer of the Year” four
times. He has also won five Soul Train Awards, five NAACP Image Awards, four American
Music Awards and numerous other honors. In addition, Babyface produced and co-wrote the
Oscar-winning song “When You Believe,” sung by Whitney Houston and Mariah Carey, and co-
founded the legendary record label LaFace. On October 21, 2022 Babyface released his new
project, Girls Night Out, which features collaborations with some of today’s brightest female
R&B stars, including Ella Mai, who is heard on the first single, “Keeps On Fallin’,” which is
Grammy nominated for Best Traditional R&B Performance and took the #1 spot on the
Mediabase R&B chart. Babyface is also a passionate philanthropist who actively supports
numerous charities including Larry Ruvo’s “Keep Memory Alive.” He has collaborated with Shine
The Light On (www.shinethelighton.com) for a special, limited-edition hoodie available on Super
Bowl Sunday in which a portion of the proceeds will benefit the charity.

About Sheryl Lee Ralph:  From bringing characters to life on screen, performing on Broadway,
producing, landing the title of national bestselling author with her literary debut, and her deep
rooted philanthropic endeavors which touch lives across the world, Emmy Winner, Golden
Globe nominee, Critics Choice Winner, Tony Award nominee, NAACP Image Award nominee
and Independent Spirit Award winner Sheryl Lee Ralph has become a staple in the
entertainment industry, with an acclaimed career spanning over three decades. Sheryl can
currently be seen starring on ABC’s smash hit, comedy series “Abbott Elementary” opposite
Quinta Brunson. In summer 2022, the show earned a total of seven Emmy nominations from the
Television Academy for its freshman season, including Outstanding Comedy Series, with Sheryl
winning Outstanding Supporting Actress in a Comedy Series. She also won the Critics Choice
award for Best Supporting Actor In A Comedy Series and landed the Golden Globe nomination
for Best Performance By An Actress In A Supporting Role In A Musical-Comedy Or Drama
Television Series.

About Troy Kotsur: Actor Troy Kotsur is renowned for his extraordinary ability to use American
Sign Language to convey a magnificent range of emotion and communication, representing
stories from Deaf Communities at the highest level. For his outstanding performance in the
Oscar winning film CODA, where he played the compelling and cantankerous Deaf father in a
Deaf family with one hearing daughter, Kotsur became only the second Deaf person to win an
Academy Award. Kotsur’s performance in this role also saw him win Best Supporting Actor awards from BAFTA, the Critics’ Choice, Gotham Awards, Independent Spirit, the Screen Actors
Guild Awards, and more. He has performed on Broadway in Spring Awakening and in numerous
stage productions by Deaf West Theater and the National Theatre of the Deaf. Kotsur was most
recently seen on television acting in the Star Wars series “The Mandalorian,” for which he
created the Tusken sign language. The language he created was also used in the show’s
spinoff series “The Book of Boba Fett.”  He will next appear in a Disney+ series about the
California Riverside School for the Deaf football team that recently won the state championship.

About Colin Denny: Colin Denny will blend American Sign Language and North American
Indian Sign Language in this Super Bowl performance of America the Beautiful. Born in
Shiprock, New Mexico and raised in Pinon, Arizona, within Navajo Nation, Colin Denny comes
from a family that is dedicated to teaching. His parents are teachers within the Navajo
community and teach the Navajo language. Colin comes from the Water Flowing Together
People Clan and was born into the Coyote Pass People Clan. His maternal grandfather comes
from the Red Running into Water Clan and his paternal grandfather comes from the Many Goat
Clan. Colin seeks to promote sign languages, with a goal of teaching American Sign Language
and mastering North American Indian Sign Language. He is working as a research assistant on
the study of North American Indian Sign Language at the University of Arizona, and is pursuing
a Masters of Art in Sign Language Education from Gallaudet University, has a B.A. in Art and
Media Design from Gallaudet and an A.A. in Fine Art from Diné College, and is a 2009 graduate
of the Arizona School for the Deaf and Blind.

About Justina Miles: Hailing from the City of Brotherly Love with a passion for the arts, Justina
Miles lives to dance and creatively express through music and sign language. She will do
double duty in signing Lift Every Voice and Sing during the pregame, and also match Rhianna’s
singing with her ASL rendition during the Apple Music Super Bowl Halftime Show. Justina has
performed dazzling ASL renditions of music at various concerts throughout the country. Justina
was part of the USA team that went to the 2021/22 Deaflympics in Brazil and returned with a
silver medal as part of the 4X100 women’s track relay team. She is currently a nursing student
and cheerleader at Bowie State University, a prestigious HCBU, and was the valedictorian at
the Model Secondary School for the Deaf in Washington DC. 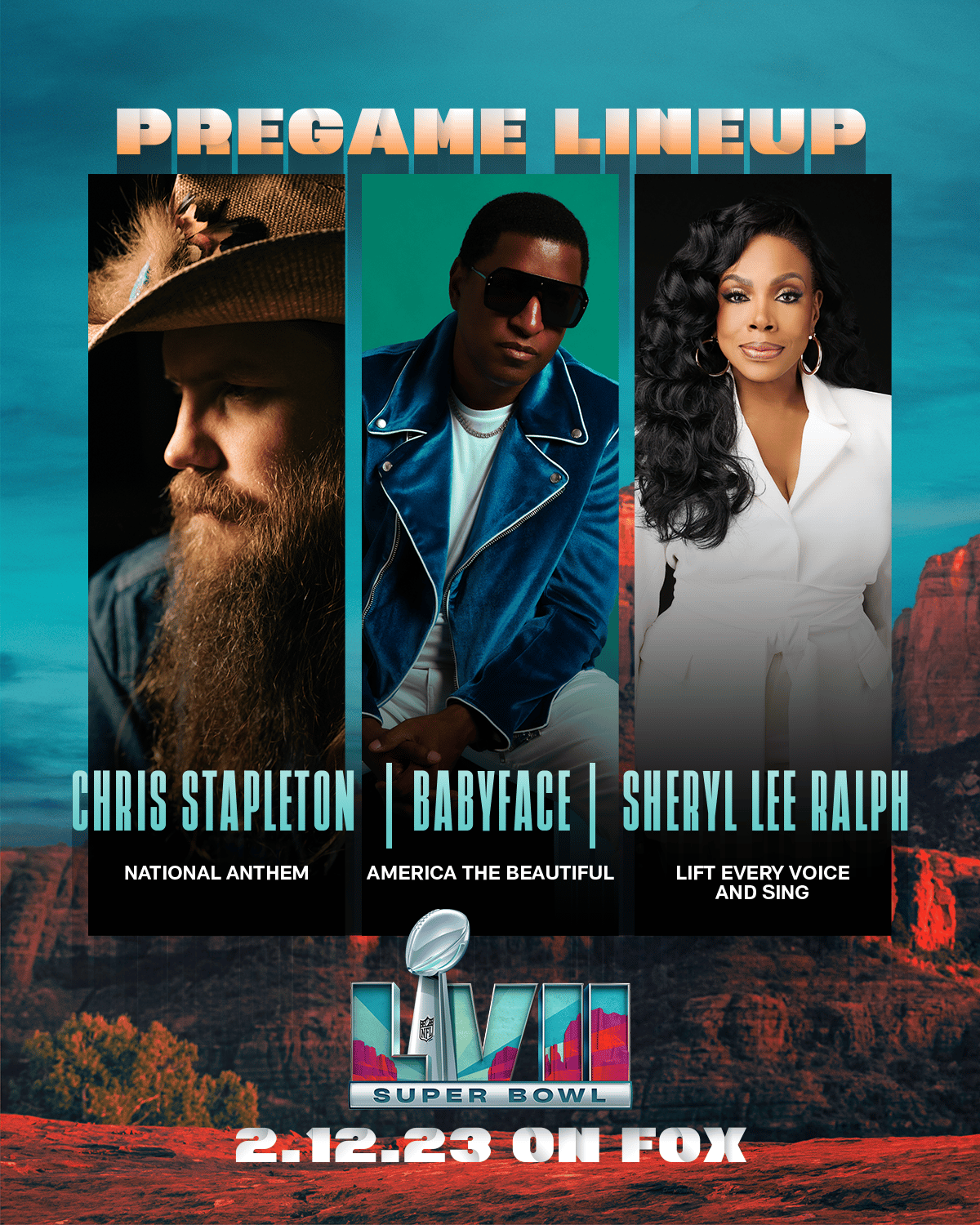