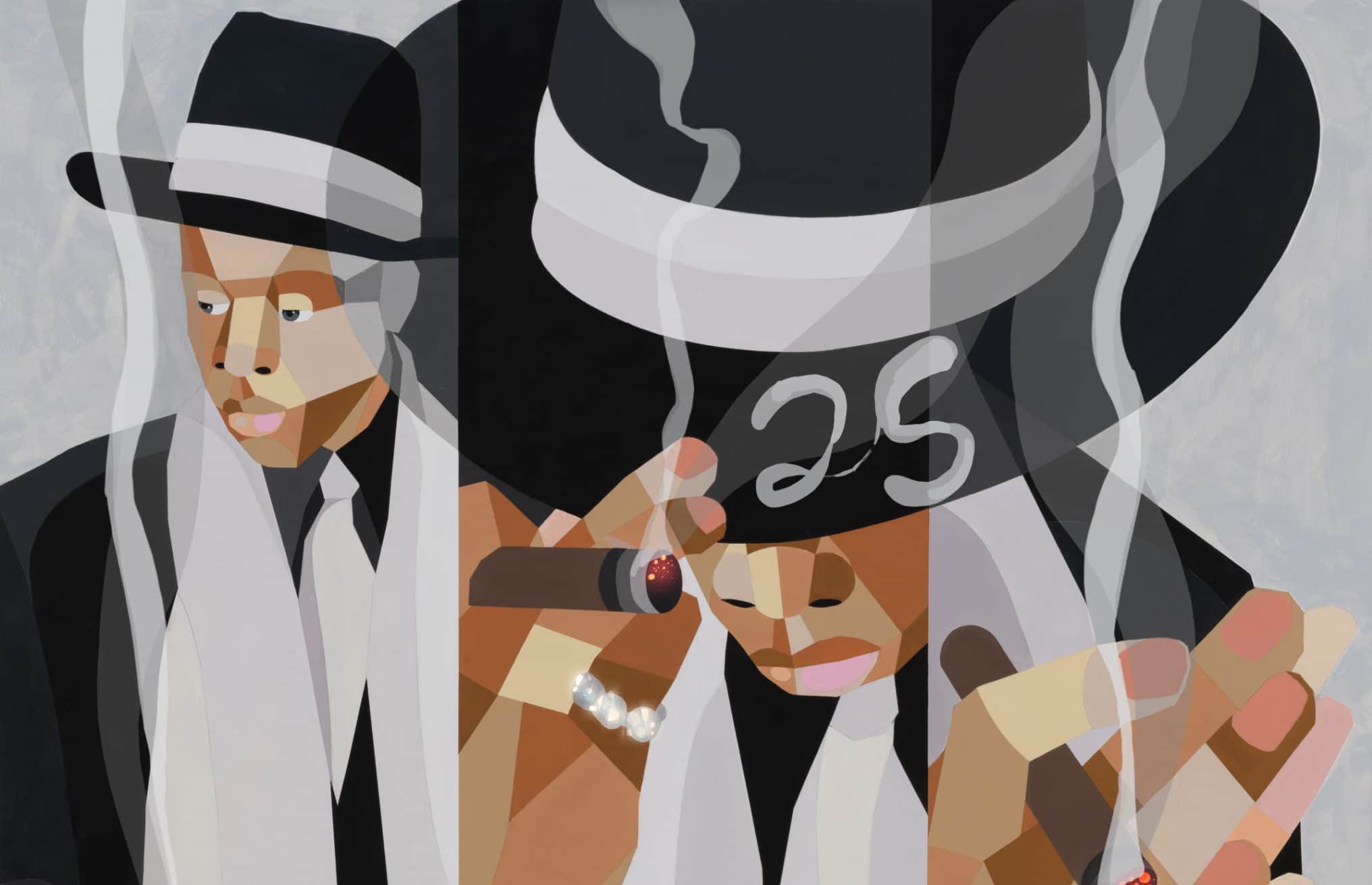 Commissioned by JAY-Z, Heir to the Throne
Recontextualizes the Album Cover’s Iconic Portrait of the
Legendary Artist & Entrepreneur

A Portion of Auction Proceeds to Benefit
The Shawn Carter Foundation 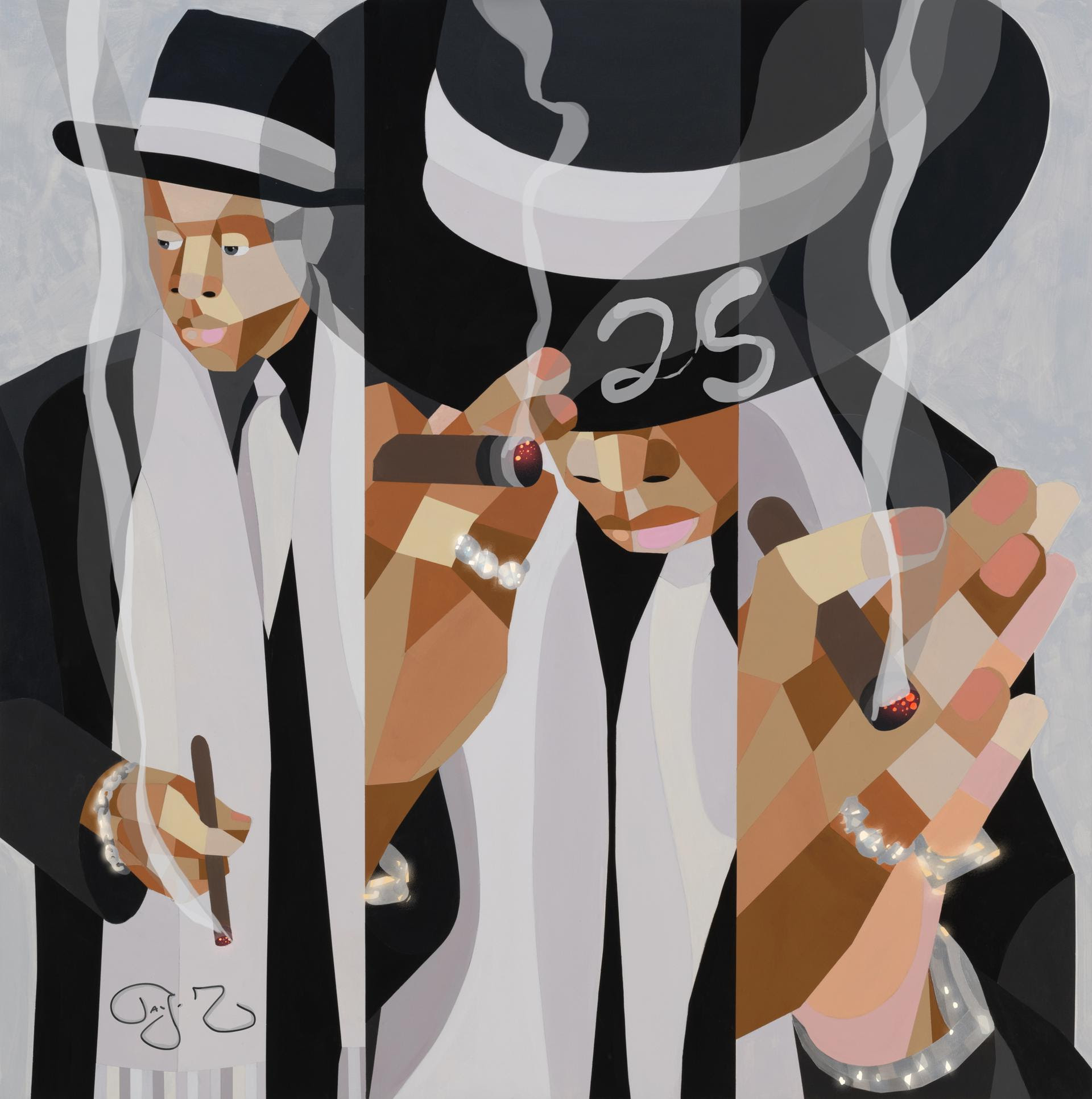 Static image of ‘Heir to the Throne’ by Derrick Adams

NEW YORK, 25 JUNE 2021 – To celebrate the 25th anniversary of JAY-Z’s Reasonable Doubt, his pioneering and landmark debut album that was originally released on 25 June 1996 and forever changed Hip Hop, the legendary artist, entrepreneur and philanthropist has commissioned critically admired multi-disciplinary artist Derrick Adams to create a one-of-one animated digital artwork that comments on and recontextualizes the album’s iconic cover, which will be sold by Sotheby’s as an NFT in a special single-lot auction. Having met several years ago, JAY-Z and Adams established an immediate artistic dialogue between them, and this collaboration marks the first NFT either has created and offered for sale. The auction is also the only official event authorized by JAY-Z to commemorate Reasonable Doubt’s historic 25th anniversary.

The one-of-one NFT titled Heir to the Throne, which was the original title of the album, is composed of a single animated digital image in which Adams creates a fresh and contemporary visual representation of Reasonable Doubt. Featuring his singular aesthetic style of bright colors, geometric forms, multi-layered textures, and flat surface dimensions, Adams has made a cinematic visual experience that channels not just the spirit and impact of the music, but also the aspirational impulses of a young musician at the dawn of his career. The work is inspired by the two men’s shared engagement with life in the urban streets, including the dreams and challenges associated with it. Emphasizing the symbolic relationship between success and a cigar, Adams makes the work come to life through animated glowing red embers and a stream of smoke that rises from the end of JAY’s iconic cigar, and transforms into the number 25 in honor of the album’s anniversary.

Bidding for Heir to the Throne: An NFT in Celebration of JAY-Z’s Reasonable Doubt 25th Anniversary by Derrick Adams starts at $1,000 and is now open online through 2 July at 10am ET. The digital artwork is also now on view in Sotheby’s York Avenue Galleries from today through 1 July and virtually via Sotheby’s gallery in the Voltaire Art District in Decentraland. Sotheby’s will accept cryptocurrency (Ether and Bitcoin) as a payment option for the work, which will be facilitated through Coinbase Commerce. A portion of the proceeds from the auction will benefit The Shawn Carter Foundation, and support its mission of helping individuals facing socio-economic hardships further their education at postsecondary institutions.

Derrick Adams commented: “Over the years JAY has collected and supported my work, and so this collaboration is particularly fulfilling. With this NFT project, we jointly embrace the opportunity to further the conversation about how artists of different mediums contribute to a more inclusive society. JAY’s album Reasonable Doubt changed the game 25 years ago, and continues to influence so many of us. It tells the story of someone from Brooklyn occupying the urban space — a place that is as central to my own work as it is to his. My portraits aim to capture the sensibility, optimism and beauty of urban life, and in JAY’s work I’ve found tremendous kinship.”

Cassandra Hatton, Sotheby’s Global Head of Science and Popular Culture, added: “It’s an extraordinary honor for Sotheby’s to present Heir to the Throne in celebration of the 25th anniversary of JAY-Z’s debut masterpiece, Reasonable Doubt. It’s fitting that JAY-Z’s pioneering lyrical brilliance is commemorated through the iconic vision of acclaimed artist Derrick Adams in a bold new medium. The release of Heir to the Throne marks the continued influence of Reasonable Doubt and its deep legacy of cultural importance.”

On June 25, 1996, JAY-Z introduced himself to the world with the remarkable Reasonable Doubt. Released on Roc-A-Fella Records and originally titled Heir to the Throne, JAY-Z made news upon its arrival with the announcement that he was only planning to make one album.

Both a commercial and critical success, Reasonable Doubt is among a handful of albums considered by critics and fans to hold “classic” status. The album signaled JAY-Z’s arrival as a major new talent, who would soon become one of the best-selling and revered artists of all time, with only The Beatles having more number-one albums.

Reasonable Doubt has been heralded for its gritty realism, dense wordplay, and mellifluous musicality, as evidence of its greatness. Chest-puffing nods to the luxe life are woven together with stark drama and dark ruminations on the realities of his early life. It was, and is, a portrait of an artist on the cusp of success and fame; the songs were too good for any other outcome.

JAY-Z’s journey to realizing Reasonable Doubt did not happen overnight. Far from it. It was an arduous journey marked by previously insurmountable uncertainties, unyielding gatekeepers, tenacious artistic ambition, and an enormous amount of sweat equity – a masterpiece wrought in rapier sharp flow and steeled in indefatigable hustle. But mostly, it revealed a young artist with a story to tell and the discipline to do so more effectively than almost any other in hip-hop’s illustrious history. 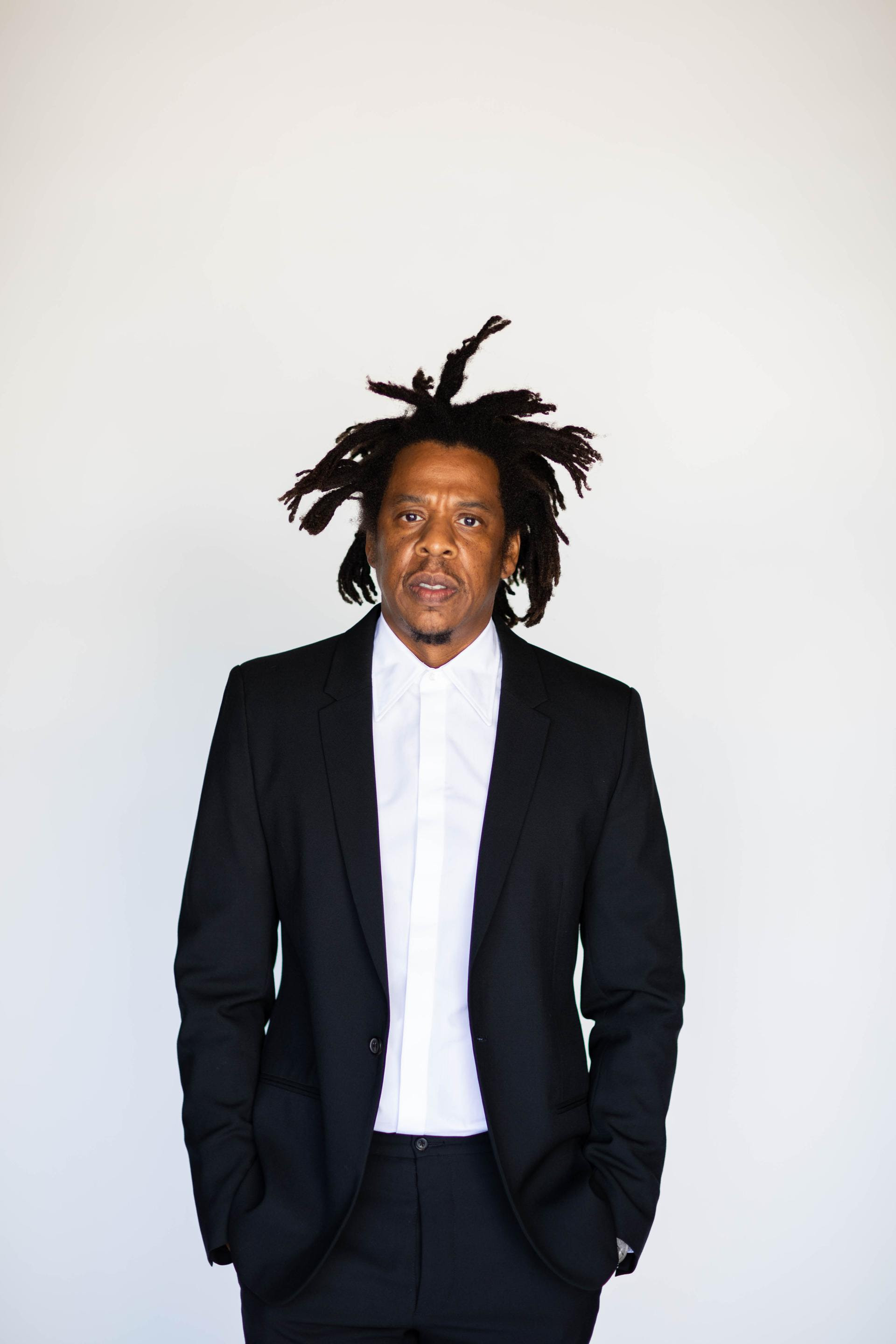 Portrait of JAY-Z by Raven B. Varona

Shawn “JAY-Z” Carter is not just the first hip-hop artist to be inducted into the Songwriters Hall of Fame and the Rock & Roll Hall of Fame, but he is also a 23-time GRAMMY award-winner. With multiple businesses, accolades across the recording and film industries, recognition throughout the philanthropic community, Carter is a globally dominant force of popular culture.

In film and TV development, Carter has helped bring to light some of the most poignant stories of our time, including recent projects: Peabody award-winning Time: The Kalief Browder Story, Rest In Power: The Trayvon Martin Story, and the critically acclaimed award winning six-part Meek Mill documentary Free Meek.

In addition to his impact on the entertainment world, Carter continues to use his platform for social good including the work of his Shawn Carter Foundation and serving as Co-Founder of The REFORM Alliance. 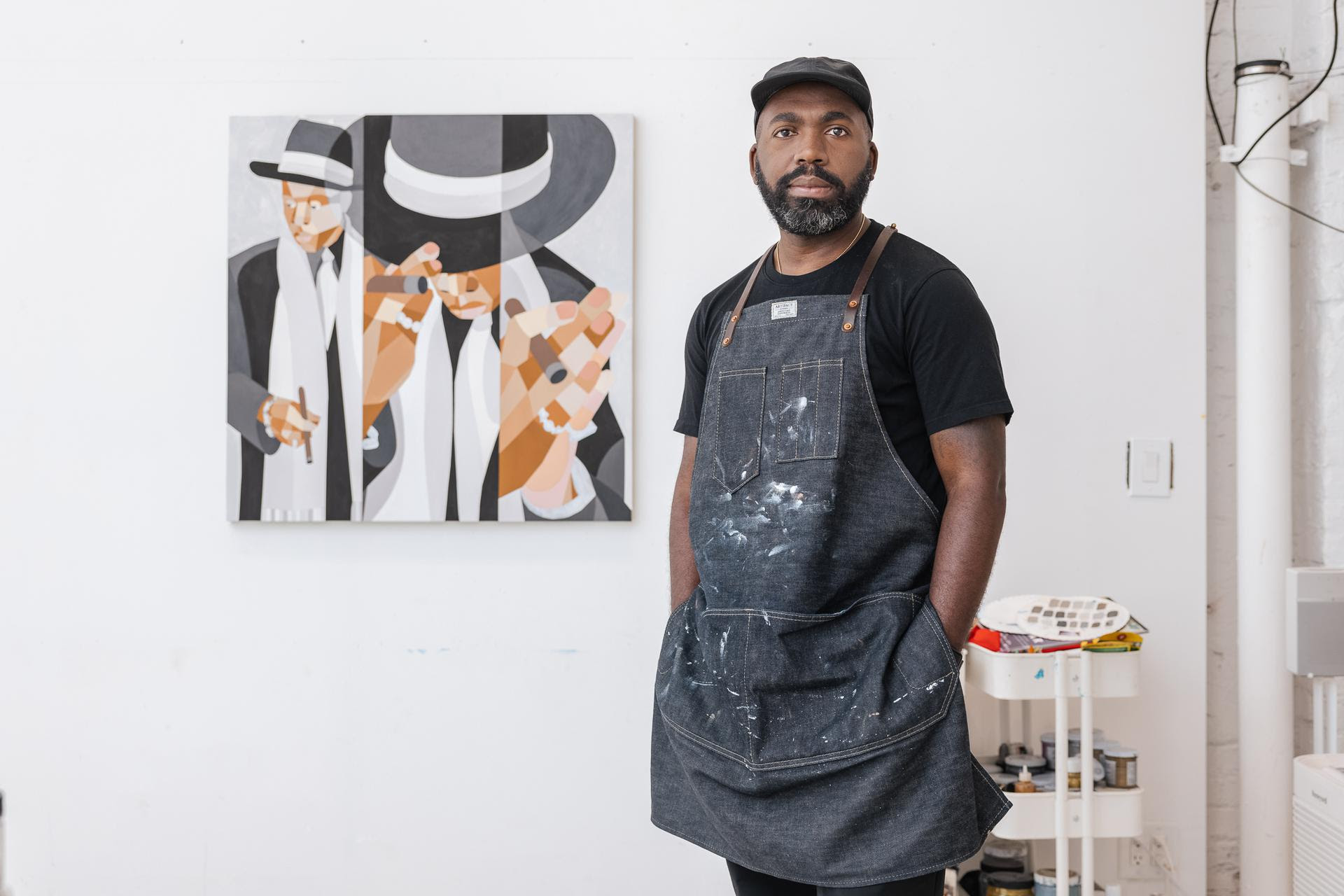 Derrick Adams is a Brooklyn, New York-based artist whose critically admired work spans painting, collage, sculpture, performance, video, and sound installations. His multidisciplinary practice engages the ways in which individuals’ ideals, aspirations, and personae become attached to specific objects, colors, textures, symbols, and ideologies. His work probes the influence of popular culture on the formation of self-image, and the relationship between man and monument as they coexist and embody one another. Adams is also deeply immersed in questions of how Black experiences intersect with art history, American iconography, and consumerism. Most notably in his Floater series, he portrays Black people at leisure, positing that respite itself is a political act when embraced by Black communities.

In formal terms, Adams’ practice is rooted in Deconstructivist philosophies related to the fragmentation and manipulation of structure and surface, and the marriage of complex and improbable forms. His tendency to layer, hybridize, and collage not only images and materials, but also different types of sensory experiences, link the artist to an estimable lineage of pioneers ranging from Hannah Höch and Henri Matisse, to William H. Johnson and Romare Bearden.

Adams received his MFA from Columbia University and BFA from Pratt Institute and has been the subject of a number of solo exhibitions at institutions such as the Cleveland Art Museum and Crystal Bridges Museum of American Art among others. 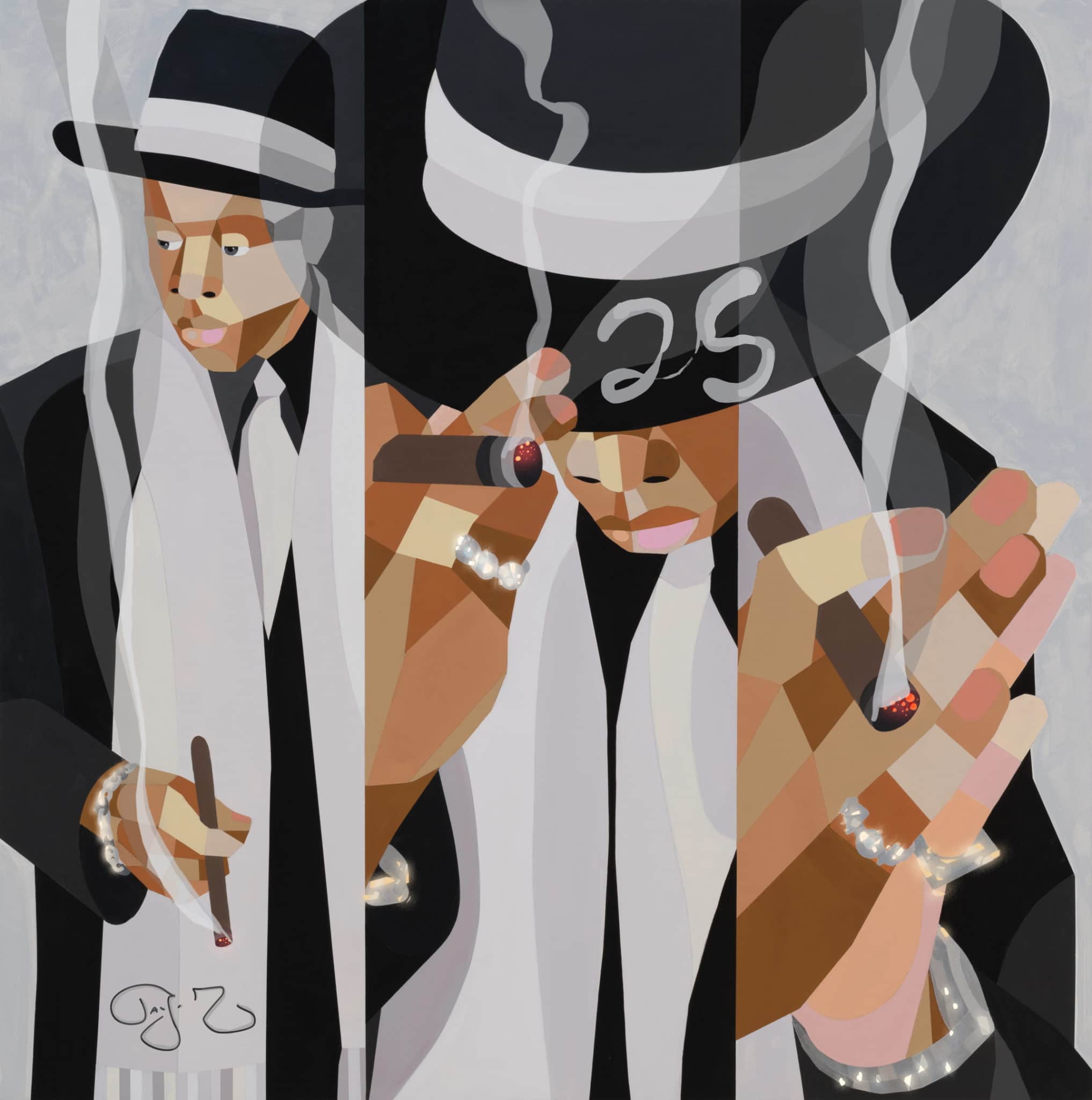