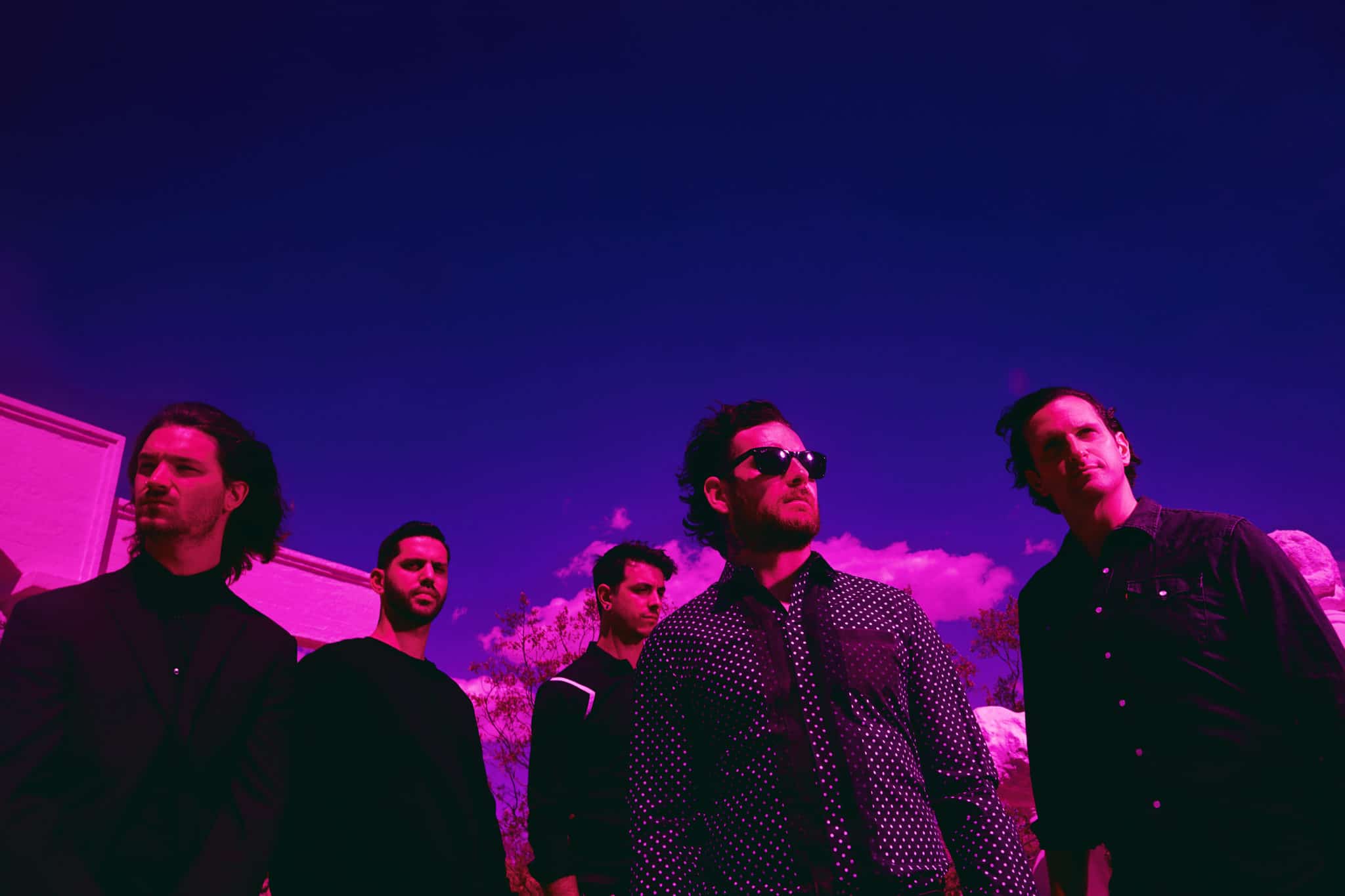 James “Buddy” Nielsen, founder and lifeblood of Senses Fail, is proof art over aesthetic will always come out on top. The singer-songwriter has seen the post-hardcore/ emo scene go from rag-tag teenagers in the suburbs to Top 40 radio play. And as the genre has made its impact on other genre, emo itself has been evolving. Senses Fail have been there every step of the way.

While born in Manhattan, Buddy lived most of his life in the northern Jersey town of Ridgewood. From as far as he could remember, music was a part of his life. In the beginning, it was just casual listening- whatever was playing on the radio or at the house. But around ’95, as Buddy entered into those early teenage years, he began to shape his own musical identity with the likes of Green Day, Nirvana, The Offspring, Metallica.

“My first record was Master of Puppets. So, I started in a really good place.”

It was this music that sparked Buddy’s interest in playing music himself. He began covering songs, learning to sing, play drums, and play the guitar- the whole gambit. And while his introduction to the world of performing music was rock, that didn’t stop him from exploring hip hop, digging into the tracks of Wu Tang and Biggie.

“When I really started to get into playing music, I was listening to a lot of pop-punk. When I was 14, that’s when I got serious and started actively singing and playing in bands and cover bands. This led to me really getting into punk.”

This continued all through high school. Playing and singing in various bands allowed him to learn not just how to play, but how to write. It allowed him to find not just the style he liked, but the natural style of his voice or his words and growing something out of that. Covering songs also gave him a sense to compare how he would do the song and what does and doesn’t work for him getting the music across in the best way possible.

It wasn’t until 2001 that Buddy started to explore the post-hardcore/ emo scene.

“I started to listen to Thursday and Saves the Day. I was listening to the local, New Jersey scene and that influenced my move to post-hardcore, emo and that whole sound. I was heavily influenced by what was going on in the New Jersey music scene. We took our favorite elements from the bands we liked and that became Senses Fail.”

The hook that snagged Buddy into the scene was the lyrics. The emotion expressed in these songs was cathartic in a way that an angry punk song can’t fulfill. It was a balance between heaviness and catchiness. Upper register vocal lines try to rescue distorted, drop-D guitars only to be slung face to face with screams resonating form the pit. Buddy wanted lyrics that are unabashed, reaching out to the world, asking if anyone else feels the same. The music was aggressive, but not in the same vein as punk or hardcore. It was purposefully multi-dimensional.

It was at the end of 2001 that Senses Fail officially formed. Original lead guitarist/ backing vocalist, Garret Zablocki, posted an online add looking to form a band. He and Buddy connected and began writing songs together, forging what eventually became the original Senses Fail line up.

“Garret had a way of playing that was just such New Jersey sound. It was emo and playing in drop-D. It just had a different sound to it.”

The songs grew organically out of Buddy and Garret’s journey into not just the basics of the genre as a whole, but embracing the essence that is uniquely Jersey emo. Understanding and connecting with locals through this music only increased their faith. This prepped them for bringing the word to the masses.

In the early years, Senses Fail had a jump on shaping their sound, re-releasing their first EP, From the Depths of Dream (2003) and then dropping their debut full-length, Let It Enfold You (2004). It was during this time that the Jersey scene became the definitive sound of post-hardcore/ emo for the new millennium. There was an appreciation for the DIY while not shying away from pop-smarts. It wasn’t long before the secret was out. The scene went from a tight-knit, local following to international airplay.

And in the middle of it all was Buddy and Senses Fail.

“It’s really difficult to put it into words. At the time you’re just in the thick of it and it happens fast. One minute you’re playing in a basement and then you move on to larger venues, following in the footsteps of the larger bands who have paved the way. Next thing you know, you find yourself in an arena playing to thousands of people. It was a really cool time to be in a band. It naturally happened.”

This led to years of extensive touring and scheduled album releases. During this time, a consistent facet of the Senses fail line up was that it was changing album to album- Buddy remaining the only original member with no breaks. And while this may clash with what many perceive to be a norm for a band, it brings to light that Senses Fail is a project more than it is any one person or persons.

Perhaps more than any other genre, the umbrella “emo” scene offers an inclusive package from the get-go. Here is this stranger, Buddy, singing and screaming lyrics that are purposefully cutting through the candy coating and getting a positive response.

“The fans are what makes it. That’s the foundation on which it all functions on. That’s why the bands who survive are the ones who make the fans a part of their story. When you’re writing something autobiographical, your fans are typically of a similar age so you’re talking about things that are pertinent to them. I’m 33 now and have a kid! My songs are about that process, now.”

It’s this embracing of growth that has kept Buddy and Senses Fail going. They know their fans are going through the same things. It’s this conscious effort which openly invites new fans, allowing more people to embrace the art.

For Buddy, the success also relies a bit on nostalgia. What people once wrote off as angst now embodies a whole generations childhood and it is still going strong 20 years after the scene went mainstream. And while nostalgia plays a role, it is just one piece of the puzzle. Raw emotion does not have to be reduced to a teen cliché. With a careful ear to composition and lyrics, Buddy and Senses Fail are showing art is malleable and proper intentions go a long way.

“This is the way we’ve just always written music and the way the songs organically come out. It’s something just really resonates with fans. On one hand it’s selfish because I’m writing it for myself. But it is to connect with other people. That is the basis of the band. It resonates with fans because it still has something else to offer.”

Senses Fail takes its name from a Hindu aesthetic tradition of releasing one’s self from attachment to reach that state of nirvana. The songs are a catharsis for the band. The songs are not generated to maximize profits of a specific corner of the market. The songs are there to make a little more sense of the universe.

“I don’t think people are going to listen to music right now that isn’t serious. They’re taking a look at the shit around them and saying, ‘No, no, no. We need to have a real conversation.’ Now, whether that’s dealing with personal sadness, or it’s something political, it still takes things earnestly.”

And this brings Senses Fail to their upcoming LP, If There Is A Light. It Will Find You. The band’s seventh full length will drop February 16, 2018. Senses Fail are ready to tackle and question what lies ahead. Buddy is a father now, coming to understand that new responsibility. Senses Fail dive into the political, embracing that it is inseparable from all facets of culture.

“It’s all a relative angst. Some of the songs may not be ‘political’, but they are topical. There’s a song about a mass shooting because it happens all the time now. How are you supposed to process that? The track, ‘Gold Jacket, Green Jacket’ is like a State of the Union Address for Millenials who are being told they are failing and not doing enough. But we inherited this world from you guys [Baby Boomers], fuck you. I went to college; I tried to get the job. It’s different now. I can’t progress like you could. It’s a different world than the ones our parents inherited. And maybe it’s time to burn down this world that was made.”

However personal art is, it is still shaped by the culture it’s created in. With If There Is A Light, Senses Fail are throwing their hat in the ring, diving in head first after it. They are utilizing the same earnest approach since the days of writing in garages and basements. And it’s this poetic honesty paired with equally explosive music that makes for a potent combo when commenting on the powers that be. Senses Fail aren’t knocking, they’re kicking in the door.
Follow Us