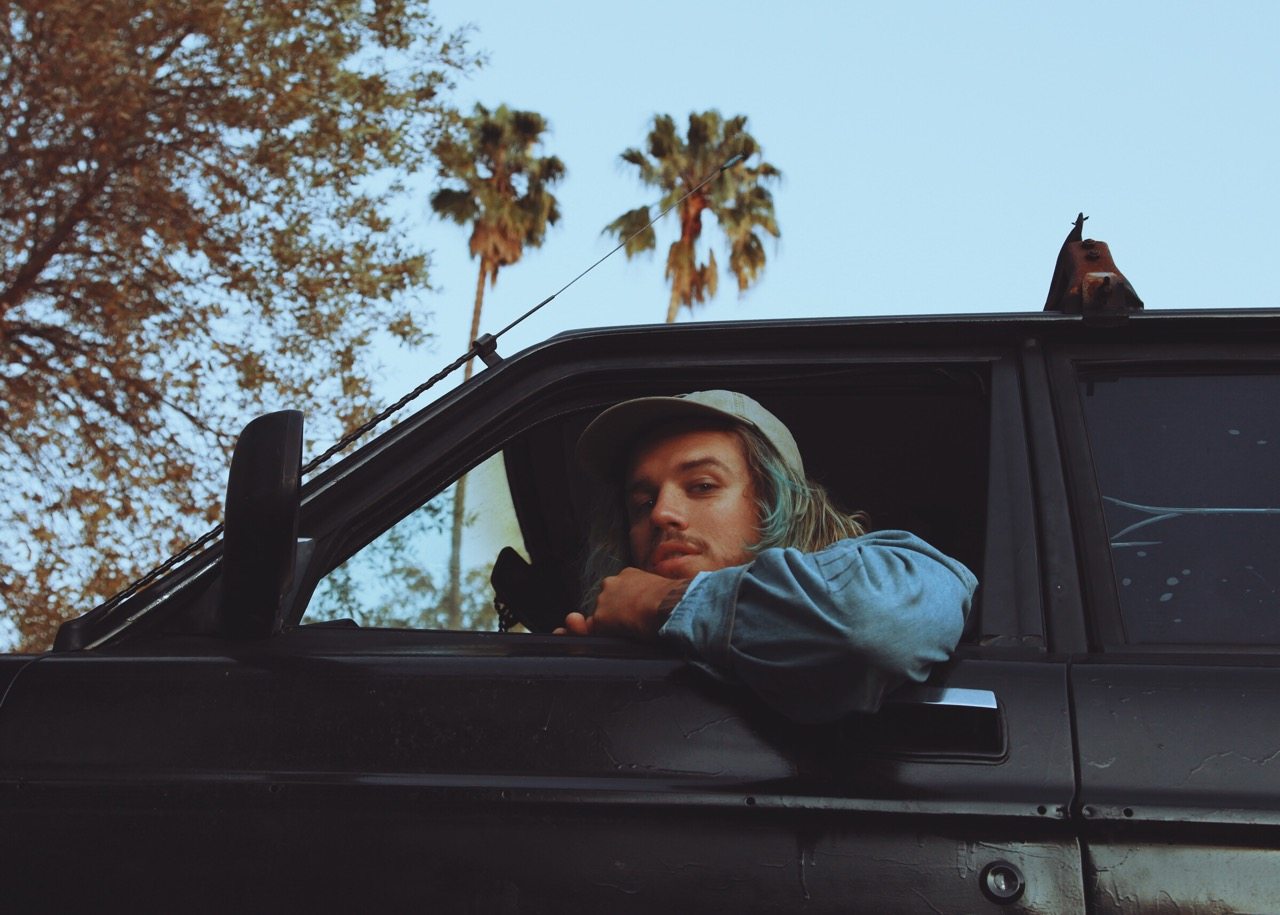 “When I was writing these songs, I pictured myself playing a house party in a dingy little beach town,” says DENM, the creative power behind the West Coast garage-pop act of the same name. “Like, all these super-sweaty college kids dancing so hard. That’s the atmosphere of my music: a little town that makes a lot of noise.” DENM makes good on that promise with his debut EP, Dreamhouse, an intriguing introduction to his whimsically escapist, rough-around-the-edges sound.

This is by design. The Santa Barbara beach-reared musician has been penning songs since the age of 14. He’s played in a handful of indie bands, been the left-of-center talent working on tracks for major pop stars, and produced likeminded groups such as Clean Spill. DENM’s aural manifesto was both day job and hobby, a passion project written every spare moment he had. “I’ve toured in bands for years,” he says. “It’s been a process of finding my own sound, my own voice. This is a step towards that.”

The buoyant banger “Lit” was the first DENM song he composed (it’s also the EP’s first single). It started out as half-dare, half-challenge to do something dancey. He played the nuanced, immediately catchy “Lit” for a few friends. They demanded to hear more. He took this to heart, and DENM, the act, sprang to life in early 2015.

The frontman’s chilled-out attitude may incorrectly suggest he’s a slacker. He concedes that his low-maintenance look doesn’t exactly help, either. “We played this show once when I had really long, mangy hair. I was wearing a brown trench coat with old, beat-up Air Jordans and baggy blue jeans that puffed up at my ankles. The tour manager said he thought I was a homeless guy until I turned around….”

The time he doesn’t invest in “looking like I belong in an H&M catalog,” he puts into dedicated studio time. Mingling pop and garage rock with BPMs and R&B requires an inordinate amount of discipline. DENM is almost ascetic in the way he works. “I don’t smoke weed and sit for a couple of hours and wait for inspiration. I write very much on purpose,” he explains. “I’ll get in the studio and hustle—like, write 10 songs on the guitar just to get one good one.” When a track’s foundation is laid, he adds in texture using synths and more guitars, producing the tracks himself.

DENM wants to be associated not just with good melodies, but also with expanding the notion of what pop music itself can be. “I’m finding this neat little hybrid between, like, deep house and R&B, that’s really fun,” he says. “I was experimenting with falsetto lines, analog synths. I was looking for a unique sound.”

Bilking the music cliché of midnight-oil inspiration, DENM composed all of Dreamhouse during the afternoon in his small, bright home studio. “I came to this place, mentally: ‘If I’m not good enough to write music during the day, then I shouldn’t be doing this. I shouldn’t be relying on delirious inspiration to make music. So I’ve made it a point to mentally turn on creativity and then turn it off, and still function in the normal world.”

This is important. Because in addition to ensuring that his output is prodigious, it keeps DENM on track thematically. “Being successful is being happy,” he says. “The other marker of my success is people having a good time listening to my music.” Dreamhouse is awash with natural uppers, such as the levitating love-down, “Green.” A rush of intricate tempos and R&B coos, this cut was, he says, “the first song I made after I realized DENM was a true project.”

“Under Pressure,” a lilting dance track that melts into new soul, takes his happiness-begets-more-happiness aesthetic one step further. “It’s probably, like, the closest song to actually making you feel happy,” he says. “It’s literally, like: If you’re sad, sometimes you have to dance. Get down with your bad self.” DENM is not speaking in platitudes; he says this from personal experience. “I’ve been in really dark places. Drugs, depression, all that stuff,” he says. “Honestly, you have to earn happiness. The struggle is real.”

“There are so many songs that take me to a certain part of a city, at different times of days,” he says. “They’re so graphic and visual.” And visceral. “I live in this weird little college town. People go crazy at shows. It’s Coachella times a zillion,” he says. “Dreamhouse is all of my West Coast experiences mixed with the pop world. Vibe-wise, it’s transporting you there, instigating a party.” That’s the paradoxical gospel according to DENM: “It’s hashtag: adulting, really. It’s so easy to stay depressed. Learn how to be happy.” And lucky for you, Dreamhouse is your cheat sheet towards that higher power.
Follow Us