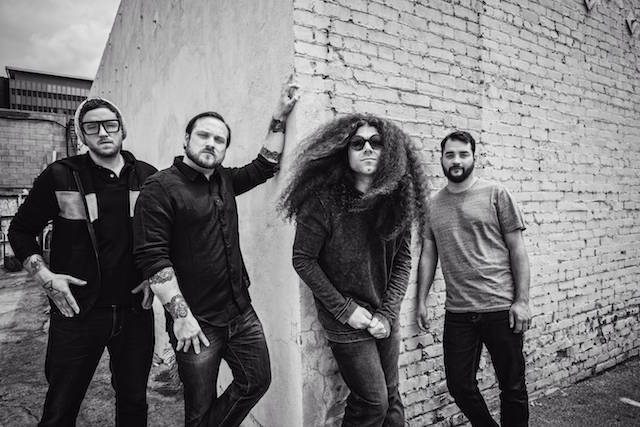 “The Color Before the Sun, the eighth studio album from progressive post-hardcore visionaries Coheed and Cambria, finally sends this band of space cadets crashing down to Earth. After traversing the outer limits of science fiction over seven acclaimed albums and more than 20 comic books, founder and songwriter Claudio Sanchez is ready to explore his emotions nakedly, plainly and unabashedly. No conceptual framework, no galaxy of characters, no seven-minute epics, no places for the band, as he quips, to “put a laser beam on it.”

“I kind of want people to know that Coheed can write that sort of record,” says Sanchez. “I’ve always said in the past that there’s never been a limitation on the band. It makes no sense to me to draw a line in the sand and never cross it.”

While the most conceptually abstruse Coheed records have always had a foundation in reality, The Color Before the Sun marks the first time Sanchez is exposing his raw feelings, narrated from his own perspective — the anxiety of fatherhood, the disorienting feeling of losing a home, the reflections had during early-morning walks. His own story is told through big, bright, driving, colorful songs that beam like power-pop, crunch like vintage ’90s emocore and float with the expansive feel of space-rock.

“Again, it was that exposed honesty,” says Sanchez. “I wanted the blemishes to create the charm…. Let those accidents just happen, let’s not microscope it.”

The concise, 10-song Sun follows Coheed’s sprawling, two-part opus Afterman: Ascension and Afterman: Descension. Both Top 10 debuts, they serve as a “punctuation mark” to the seven-album Amory Wars saga that included 82 minutes of music and a hardcover coffee table book. Around the time of those records’ completion, Sanchez and his wife left their cozy, secluded home in New York’s Hudson Valley for a more nomadic life, attempting to find their place in the world. After travelling to California, Florida and Paris, they ultimately fell in love with Brooklyn, leaving their quiet home for a cramped brownstone in Park Slope. Used to working in solitude, Sanchez instead found himself writing music in the middle of a railroad apartment.

“Normally…I need to kind of get into my own head and create these characters,” says Sanchez. “So I felt very exposed. I knew that our neighbors could hear me. At one point somebody had asked if a woman was in the apartment singing, and I was like, ‘Aaaah!’ I think that subconsciously leaked into the music that I actually created. I kind of gathered this collection of songs that very much chronicled the situation I was feeling there. I didn’t understand who I was, what I wanted to be. I was writing these songs that weren’t part of a formula. It just felt foreign.”

During the process, he also discovered his wife was pregnant with his son, Atlas, and the anticipation of being a father started to influence his songwriting. The tender acoustic ballad “Ghost” has Sanchez pondering what type of parent he will be; the explosive, deceptively triumphant “Atlas” anticipates what life will be like leaving his first-born son when he goes on the road; “Here to Mars” is a simple, hard-chugging love song to his wife.

The destroyed home on the album cover is no metaphor. The tenants who had rented Sanchez’s house upstate had abandoned it, leaving some demolished floors, the residue of a colony of plants and the stench of marijuana. It’s speculated that the home where Coheed and Cambria created their last four records — writing upstairs and rehearsing in the basement — was totaled after the residents turned it into a grow-house. Songs on Sun deal with the transient feeling of Sanchez not knowing whether to stay on the “island” of a Brooklyn block, or in the comforting country confines of his home, whether destroyed (“Colors”) or intact (“Island”).

Though never leaving our own solar system, The Color Before the Sun, may be Coheed and Cambria’s most important saga — a story that’s sketched less like an explosive Image Comics title and more like an introverted Drawn and Quarterly book, less like Todd McFarlane and more like Adrian Tomine.

“That’s always sort of been the reason for the concept, was that it was a curtain to hide behind,” says Sanchez. “I always found it very hard to be that heart-on-your-sleeve songwriter. Maybe it’s the fear of judgment or whatever. I felt like if I could just hide behind these fictitious characters, then nobody will judge me. They’ll judge the work, but it won’t stain me. It’s almost like trying to distance myself from the art, whereas this time I’ve sort of embraced it and allowed it to be me.”
Follow Us